Warm Meals, Wherever Home Is

Project Hope Alliance is so thankful to have received a donation of 180 Shark Ninja Foodi Pressure Cookers, which has changed what meals look like for our families. The donation came thanks to celebrity chef and Bravo TV Top Chef alum, Shirley Chung. Shark Ninja reached out to Shirley, asking if she knew of an organization that could benefit from the pressure cookers. As a long time supporter and donor to PHA, Shirley instantly thought of us.

The pressure cookers were received at the end of July and are being distributed at our weekly Motel Outreach. The Motel Outreach was started in April as a response to school closures. It is a weekly rotation of PHA staff members and volunteers, bringing Chromebooks, pre-paid Wi-Fi hotspots, nonperishable food, fresh produce, and now, pressure cookers, for any families with school-aged children staying in the motels.

The Motel Outreach was originally only intended to last through June, but PHA continued to see the increasing needs of the families staying at the motels, so the program has continued on to this day. The pressure cookers have become the bridge between healthy produce and a home-cooked meal. Most motel rooms come with only a microwave to prepare meals. The pressure cookers simply require an electric outlet and can be used to cook fresh or frozen foods in a variety of ways.

These pressure cookers go beyond simply providing a basic need to our families. “Access to a kitchen no longer is a barrier these families have to face to provide healthier meals for their children,” said Jennifer Friend, Project Hope Alliance CEO.  “Thanks to Chef Shirley and Shark Ninja our children living in motels can have nutritious options to help them focus on their distance learning.”

Since the distribution of the pressure cookers began in early August, the feedback from families at the motels has been incredible.  A mom called us to share how much it has helped her prepare meals in the morning, so she is free to help her kids with distance learning.  Another mom of 5, who is staying in a motel, came to us with tears in her eyes, telling us how the pressure cooker allowed her to cook a meal for her family for the first time in over a year. She was even able to make her daughter a birthday cake using it. 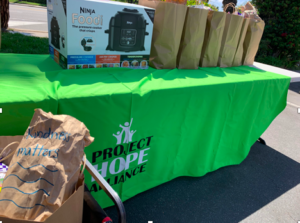 To Support the Motel Outreach and PHA’s programs, click here